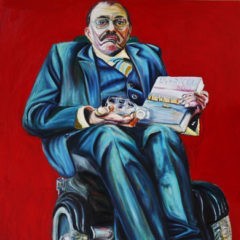 When I heard Bert had died, it gave me good cause to reflect on our very long relationship over decades. I was just fifteen-and-a-half years old when I briefly met Bert for the first time. He was showing disabled school leavers around Hereward Adult Education College. He was about to leave it and I was about to start there. I had no idea that our paths would cross again and again throughout our lives.

When I graduated from Sussex University we met again at RADAR (now Disability Rights UK). I was recruited by its then CEO and Bert was his deputy. I was 22; young, naive and full of hope for a purposeful career. Six months later, Bert sacked me. The CEO considered I was unemployable because I couldn’t use a manual typewriter! Many years later I found out that  Bert was pretty much acting “under orders”. But for many years as I became more involved in radical disability politics, I gladly joined in  calls to denounce both RADAR and Bert. I refused to speak to him for many years.

Then, in the early 1990s, we met in my office at the Disability Resource Team when I was running the Disability Equality Training Department. By that time, I and disabled people across the country felt a unique sense of emancipation from the old chains of the disability establishment, especially traditional disability charities like RADAR. I was ready to make my peace with my old adversary. I asked him why he did not fight for me, a fellow disabled person, all those years before. It was an important day for us both because, unknown at the time, we would need to work to do together in the future.

Bert told me he deeply regretted firing me from RADAR. He wished he had had the personal strength and power to do more to prevent it. That day I realised Bert had been caught in the same oppressive culture as me, it just manifested itself differently. I understood that he had been biding his time, waiting for the right opportunity to take control of the organisation and change it. He did finally become CEO but I don’t think change ever really happened there.

It was his appointment as Chair of the DRC, allowed him to show us the real Bert. The radical uncompromising Bert. This never meant he took to the streets or got arrested. Not his style. He preferred to fight from within the establishment, especially the corridors of power in Parliament. This, I feel, deserves to be better recognised by disabled people.

Having studied the early women’s movement, analysing the key factors behind the women’s suffrage, plus my own experience over three decades in the disability movement, I have learnt a vital lesson. The essential relationship between campaigning from outside and negotiating from within. Both components, running concurrently, are essential for influence and change.

For the first two decades radicalism and direct action were my primary driving force. Bert took the other road of negotiation and at times necessary compromise with the establishment. You chose your strengths but the fundamental principle of equality for disabled people is the same. We both made a contribution, different but equally important.

Bert’s contribution to our liberation is fundamental. He was a man of his time, fighting from within a very oppressive culture. In many ways this was so much harder but he never wavered. He worked harder and longer than any disabled person I know. Bert rightly deserved the credit afforded him by the establishment and he deserves our credit as disabled people now engaged in the continuing struggle for disabled people’s equality and human rights.

On a personal note, he taught me how to survive within Parliament, to play the game and sometimes win. Whilst I had criticised him personally, he never did the same to me. He completely understood and respected where I was coming from. Such maturity is rare. I have learnt so much from Bert and I like to think we were very good friends during my later liberation. It was a true pleasure to work with him at the DRC and to chat to him on the phone regularly after it closed.

So summing up my relationship with Bert, I would say, in the beginning our differences made it seem that we were oceans apart but in later years we were more like-minded than I ever thought was possible. Thank you Bert, for your generosity of spirit and all that you have done for disabled people and shown me personally.

Time for you to have a well deserved rest!